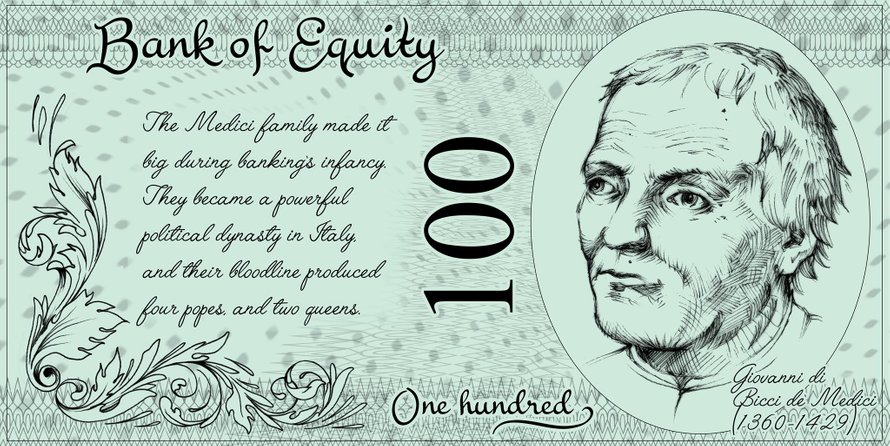 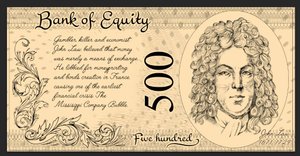 The facinating case of Mr John Law
Equity the board game 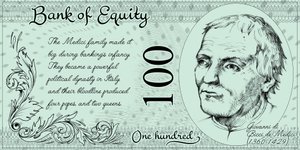 Why we chose Giovanni De Medichi

Why we chose Giovanni De Medici.

We have chosen Giovanni de Medici for our first play money bill! By the year 1400 Giovanni’s banking business had made him one of the richest men in Europe. His sons became influential politicians and they took power in the city of Florence. The Medici dynasty was instrumental to the funding of the art of the renaissance. In Florence they housed and commissioned art by Michelangelo and Brunelleschi. Even Galileo Galilee was employed by the family!

Banking first emerged in trading cities in what is now Italy. Their main activity was to help traders change between the many different currencies at the time. The word bank refers to the bench that the moneychanger would sit behind as he counted out the coins. As the bankers businesses grew bigger they would become trusted companies that were able to issue credit, and to take in deposits from traders that wanted to avoid travelling with large sums of money.

For our experimental economy board game we decided to make the Medici our motive for one of the play money bills, because they are such an interesting example of the early financial services. And the strong connections not only between money and politics, but also between money and art history.

Equity is published by Intuitive Games