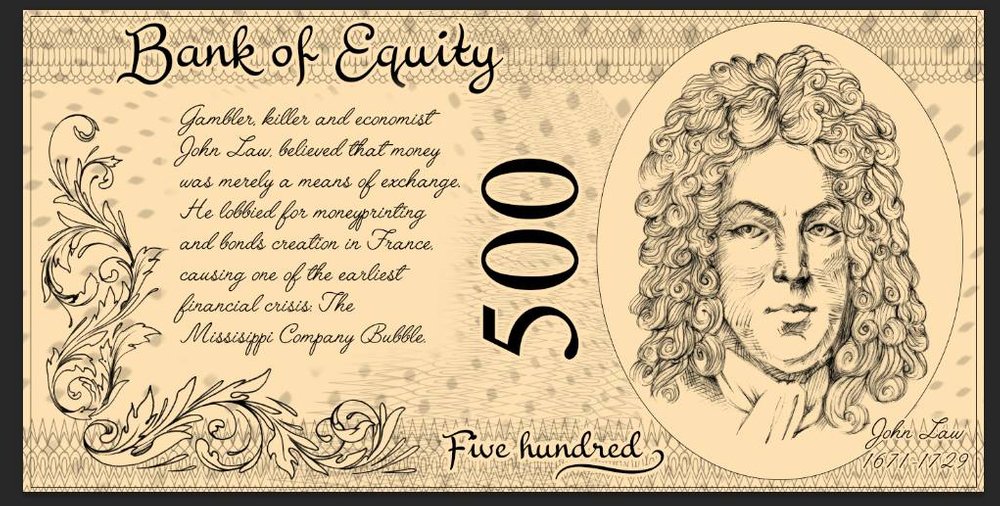 The scottish killer, gambler and economist John Law fled his home to avoid execution. Soon he would find himself at the very top of the French aristocracy. His reputation as a cunning economist, friendship with a nobleman and the poor conditions of the French state funds, was just the coctail he needed.

Sentenced to  death after killing a man in a duel over a woman. John Law was jailed in Scottland. But somehow he managed to escape and fled through Europe, finally settling in France.

When the king of France died in 1715, the Duke of Orleans became temporary head of state while the five year old regent were being educated. John Law was hiding out in France, and had personal connection to the Duke. The Duke contacted Law after he discovered the huge debt of the crown. John Law quickly exceeded the role of advisor to become the head of a new kind of bank: A central bank with the rights to print paper money! This was new in France, where silver and gold had been the only currency up to this point. The idea was that more money in circulation would lead to more commerce and higher economic output. And it did work.

John Law set up a company to manage the French colonies in North America. Known as the Missisippi Company it became a hugely popular investment, promising future incomes of precious metals from a world very few had ever seen. The stock prices rose from 500 livres tournois in January 1719 to 10,000 livres tournois by December the same year. Everybody wanted a piece of the action! And the term millionaire is said to have been coined by investors at that very time.

But all was not well in the American colonies. Expecting to get rich, settlers instead found themselves in a damp marshland with alligator’s, mosquitoes and deadly deceases. To keep demand for stocks growing, and to fund the operations of the company, John Law’s bank continued to print large sums of paper money. The money was tied up to the silver and gold held by the bank. Once investors started to withdraw their funds, exchanging their paper for gold, there was an issue. There was more paper money in the economy, than its value of metal in the bank!

Regulations were put on how much you could withdraw and stocks was made available by the bank in exchange for paper money. Effectively increasing the amount of paper money by almost one hundred percent from one day to the next. Inflation followed.  By January 1720 the value of paper money decreased by 23%. Every month! In September 1721 share prices had dropped to 500 livres. The bubble had burst.

Although disastrous at the time, the financial innovations of Mr John Law are widely accepted today. Our money is not even backed by any metal; our paper money hasn’t even got paper. They are purely a means of exchange.

After John Law’s bubble burst, France left paper money, and did not return to it for another eighty years!

Equity is published by Intuitive Games